SUE SCAVO’S debut book of poetry Buried [A Place] will be released from Anhinga Press on April 10, 2022. Her poems have appeared in Poet Lore, Blue Heron Review, Aster(ix), Burning House Press, Literary Mama, Panolopy and many others; and in anthologies, including What Have You Lost? ed. Naomi Shihab Nye. She has an MFA in Poetry from New England College. Scavo also received a writer’s residency at the Vermont Studio Center, where she later became a staff artist for several years.

Scavo is the co-founder and editor of deLuge Literary and Arts Journal. She is an Embodied Dreamwork analyst and teacher who has taught courses/workshops on creativity, writing and dreaming for over twenty years.

She has taught/presented internationally at conferences/venues such as Esalen Institute, Kripalu Center, Breitenbush Retreat Center, The Rowe Center, Hollyhock and the International Association for the Study of Dreams. 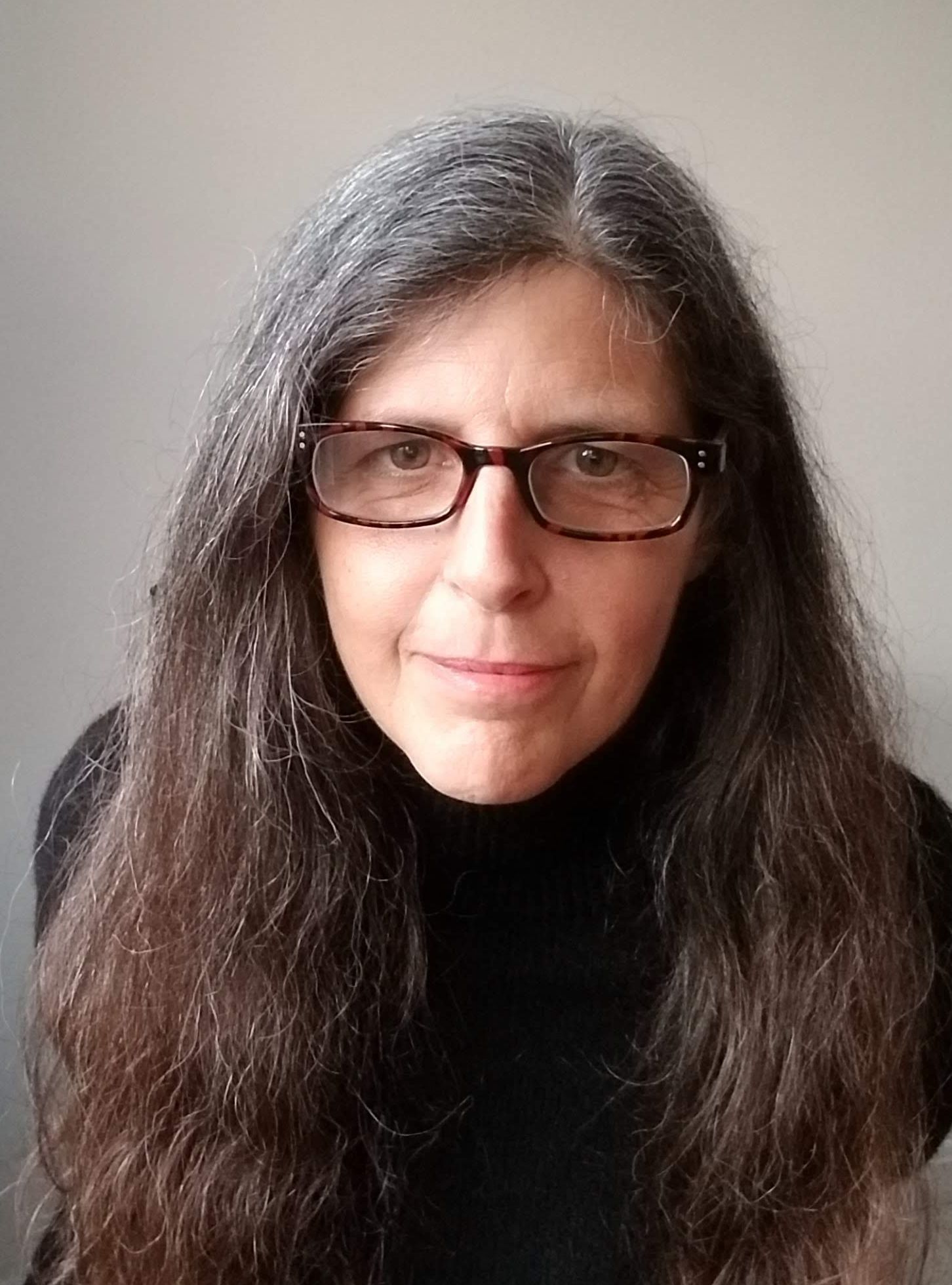 Never have I seen the female form so unearthed—not just the body—but the sound of its voice, the shape of its language.

Amy Irvine, award-winning author of Trespass: Living at the Edge of the Promised Land and Desert Cabal

To dwell in Sue Scavo’s imagination is to suspend time and what we have come to know—so that we may re-know it. 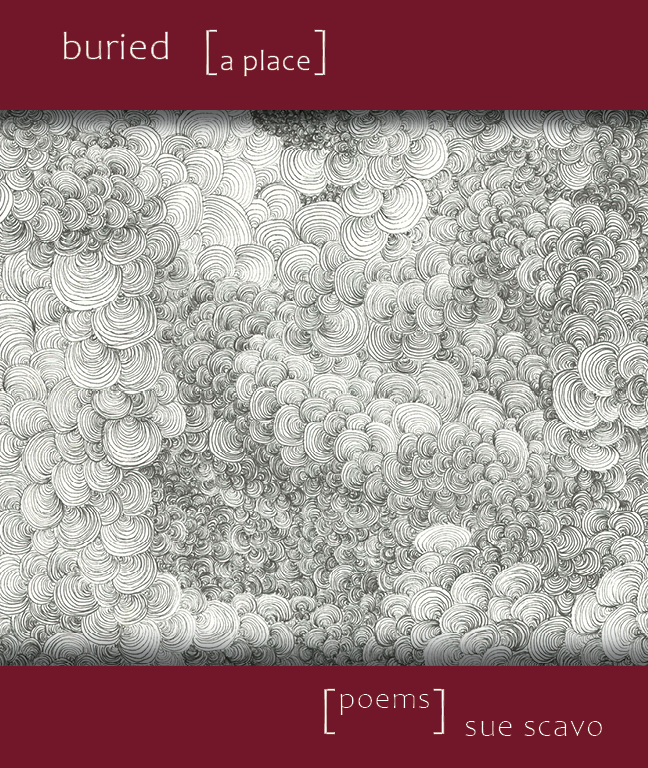 Selected Praise for Buried [A Place]

Never have I seen the female form so unearthed—not just the body—but the sound of its voice, the shape of its language. As BURIED resurrects, the Father’s house is upended. A house built and maintained by enslaved bodies, sourced from an exploited earth. A house that is now on fire. There is no tongue as deft as Sue Scavo’s to both name the crimes of the patriarchs who lived as gods and to indict her own willingness to be their supplicant. Until they point downward, to Hell, as if the inferno weren’t right here and now. The lie of transcendence is, in truth, the molten core of violence. In a voice all atrium and ventricle, Scavo renounces the descent, reclaims what has been interred. The body as sacred topography.

Amy Irvine, award-winning author of Trespass: Living at the Edge of the Promised Land; Desert Cabal: A New Season in the Wilderness; co-author of Air Mail (with Pam Houston). Almost Animal: Tracking the Wilder Mother is forthcoming 2022.

“In the middle of being lost, you have to understand – I prayed for a straight path, a true path, a way through path,” so begins Sue Scavo’s tremendous work BURIED   [A PLACE]. Scavo leads the reader, vicariously, often with direct address, along a path of self-retrieval. Imbedded in the text is a correlation, argument, and dialog with Dante’s own journey described in Inferno of his Commedia. Scavo delves into the territory of the woman’s experience, her body, her relationships; between mentor/student, brother/sister, father/daughter. Follows the often-perplexing states of love, trust, transference, transgression, violation, to eventual autonomy, and if not forgiveness, understanding.  Scavo’s use of language, her tight turn of words, are like steppingstones, like a torch in a dark wood. She is a true new voice in poetry’s landscape. Take notice.

Karla Van Vliet, poet of Fluency: A Collection of Asemic Writings;
She Speaks in Tongues; From the Book of Remembrance;
The River From My Mouth; Fragments: and From the Lost Book
of the Bird Spirit.

In poems nearly pre-language and dream-born, in language bracketed and shifting, ruminant, Sue Scavo’s poetic sequence, BURIED   [A PLACE], excavates a woman’s soul, “not journey girl, not worthy girl,” from the patriarchal firmament. Questing, trusting, she follows a teacher’s guidance but finds him “greedy in [his] story taking, hoarder of what defines.” Here is myth re-making, the act of hunting for new language inside the body—“the place of past, the place of never-changing, the place of gnarl.” These poems, talking back to Dante’s Inferno and history itself, take us down the long path of coming into knowledge, from “what [I thought] was my memory” toward “our own words as lantern.” If “once there was a girl who filled her breath with salt water / and remembered song,” drowning in order to sing, here, instead, is the story of being told, “Watch your step,” and refusing. “I stepped and stepped.” To dwell in Sue Scavo’s imagination is to suspend time and what we have come to know—so that we may re-know it.

Kerrin McCadden, award-winning poet of American Wake, Landscape with Plywood Silhouettes,
and Keep This to Yourself.

Any work that explores the different dimensions of trauma – historical, social, personal, psychological, cultural – as courageously and inventively as BURIED, deserves a warm welcome. In this remarkable journey — an inner journey as much as outer, and an exploration of the meaning of the “journey of healing” – Scavo revisits Dante in a series of tightly wrought Cantos. The poem takes us on an unflinching descent into the dream-scape and myth-realm where the foundations of our burning world of patriarchy and trauma are formed and perhaps capable of being transformed. But this fearless voyage into the underworld is also an implicit ascent — a personal, emblematic and powerful search for new light amid the dark.

Henry Shukman, author of One Blade of Grass,
In Dr. No’s Garden and Archangel