Born [in the middle] in Cincinnati, Ohio, Sue has lived most of her life at one edge [California] or another [New England].  Her debut book of poems Buried  [A Place] is forthcoming Spring, 2022 from Anhinga Press. Go here to order!

Her work has been published in numerous publications including Poet Lore, Blue Heron Review, Aster(ix), Burning House Press, Literary Mama, Panolopy and others; and in anthologies, including What Have You Lost? ed. Naomi Shihab Nye (Harper Collins). Before receiving her MFA from New England College, she was awarded a writer’s residency at The Vermont Studio Center in Johnson, Vermont where she became a staff artist.

Sue is co-editor/co-founder of deLuge Literary and Arts Journal and is a Dreamwork Teacher/Practitioner who has taught/presented internationally at conferences/venues such as Esalen Institute, Kripalu Center, Breitenbush Retreat Center, The Rowe Center, Hollyhock and the International Association for the Study of Dreams. 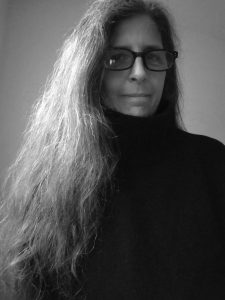